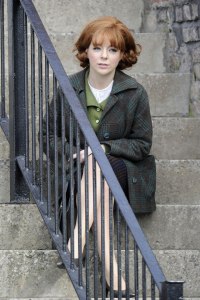 Have recently finished designing ‘Cilla‘ for ITV, directed by Paul Whittington and starring Sheridan Smith as the young Cilla Black.  The 3-part drama tells the story of Cilla’s rise to fame in 1960s Liverpool.  We worked on location and in the studio in Liverpool itself, turning it back fifty years and doubling it for New York and London.  Can’t post anymore than that yet, but it should be on your screens in the autumn season.

There were several influences on the design of the show, including Hockney, but the man who inspired our colour and textures the most was Sean Scully.  When I first came to Liverpool, it was the stone and block work all over the city that captured my imagination, which led me, via Brassai’s photo-history of European stone-carved Graffiti,   to Scully’s work.  His book, “Color of Time” became the cornerstone to the scenic painting on the job and has a proud place on my bookshelf as one of the greatest references for colour, age and texture.

One thought on “CILLA for ITV”